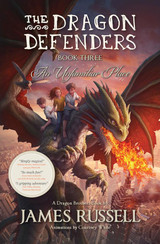 The Pitbull’s plans to capture the dragons from Flynn and Paddy’s paradise island have been spoiled twice already, so he’s hell-bent on revenge. But first he must find a way to lure the brothers to the city.

Meanwhile, to punish his niece Briar for her betrayal, The Pitbull locks her in a prison cell, high in his tower.

Surely escape is impossible this time?